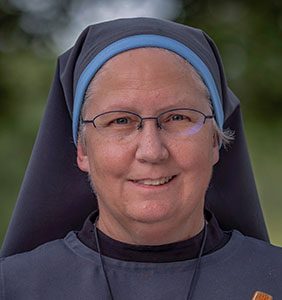 Always attracted to the religious Sisters she met as a child, Lynne started asking questions about their life, as a fourth grader. It wasn’t until her senior year in high school that she had the courage to tell others about her own calling.Lynne Windfeldt was born in Denver, Colorado, the oldest of four children. Baptized a few weeks later, her parents raised her in a strong Catholic home. She attended two years of Catholic school, as well as CCD classes, yet her parents were the primary ones to educate her in the faith.

After receiving her First Communion a year before her class due to her mother’s instruction, Lynne knew that God had a special plan for her life. She found herself attracted to Sisters and willing to ask them what their life was like, but she never dreamed that it was for her. Lynne saw herself as a tomboy, one who didn’t get along well with the other girls her age. She loved hiking, skiing, and rafting, and often she got herself into dangerous situations and accidents. The Lord through her guardian angel protected her in many life-threatening situations, and these events also confirmed God’s special plan for her life. The pastor of her parish was a close friend of the family’s, so Lynne felt free to ask many questions about Jesus and the Eucharist. Lynne continued to grow spiritually from her mom’s guidance and from retreats and bible camps.

By Lynne’s teenage years, her father’s restaurant business was very prosperous, and the family was well off. For some reason she couldn’t explain, Lynne was not happy about new clothes like other girls her age. Material things did not appeal to her. Even in the innocence of her high school years, her sister and friends began to associate her with the religious life. While watching ”Brother Sun, Sister Moon,” a movie about St. Francis, she was moved by Francis’ simplicity and love of poverty. One night before graduation, her high school youth group began a discussion about what each student wanted to do with their lives. It was then that Lynne’s date to the prom said that he wanted to be a priest, and Lynne said she was going to become a nun. That summer, she began visiting convents.

Lynne met the Disciples of the Lord Jesus Christ when she was twenty-two. She came to visit the community in 1985, where she received special teaching on the Holy Spirit, and later prayer for the Baptism in the Holy Spirit. She entered the community in 1986, receiving the name Sr. Mary Thomas as a novice in 1987. She professed her first vows in 1988, and her final vows in 1992. She does not see the religious life as a sacrifice, but rather as an exchange of nice gifts from God for greater ones. A quote from St. Thomas Aquinas that sums up her life is ”God alone satisfies.” She ‘counts everything as loss’ but her Lord, Jesus Christ.