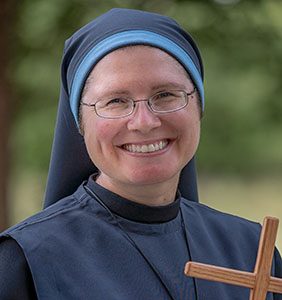 Sister Mary Gianna never imagined God would call her to religious life.  She was not raised Catholic, or any religion.  It was during some of the most difficult moments of her life, after surviving the tragedy that took place at her high school, that she came to believe in God and that He had a plan for her life.

Jenica Thornby was born in Houston, TX to loving parents.  At the age of three, her and her family moved to California, and then to Colorado at the age of 11.  She is the youngest of two.  At her birth, she was given the name Jenica, which she would later come to find out means, “God is gracious.”  However, growing up without any faith at the time, she struggled with some of the most basic questions concerning human life, including what life was about, who she was, and what she was living for.

Jenica’s life changed forever when she was 16 years old.  She was a sophomore at Columbine High School on April 20th, 1999, the day two of her schoolmates opened fire killing 12 students, one teacher, and wounding 23 others.  Jenica narrowly escaped being in the library, the center of the tragedy, when an inner prompting urged her to leave school that day just minutes before the shooting, instead of going to the library to study as she normally did.  She wondered, “What made me leave school that day?  I always went to the library.”  She remembers being told, “God must have a plan for your life!”

Immediately, she believed God existed, but not really knowing who this God was and how to deal with everything that happened, and still wanting to fit in, she turned to many other things.  Yet everything only seemed to leave her feeling more empty, longing for more.  One thing after another happened, and by her senior year, she hit rock bottom.  She felt she had lost all hope.

It was during this most difficult time of Jenica’s life, that she was led to Saint Frances Cabrini Catholic Church, where a wonderful faith community reached out to her.  Among them were two exceptional youth ministers, Kate and Jim.  Kate shared with her about a God who passionately loved her.  As Kate shared the message of the Gospel with her, she felt God’s love pour through Kate, and she realized that all her life she had been longing to know God and His love.  She came to know the words of Saint Augustine, “Our hearts are restless until they rest in Thee.”  Jenica decided she wanted to become Catholic and give her life to Christ.  She wanted to discover what God’s plan was for her life.  Jim suggested she go to Franciscan University where she would be immersed in the Catholic faith.  During her freshmen year, she went through RCIA and was welcomed into the Catholic Church on March 30, 2002.  She was baptized, confirmed, and received first Holy Communion all at the Easter Vigil.

Over the years, Jenica has thought a lot about the terrible tragedy that took place at her high school and how God has worked in her life.  The story of Rachel Joy Scott has significantly impacted and inspired her life.  Before Rachel’s life was taken, she was asked by one of the gunmen if she believed in God.  Jenica was amazed how passionate Rachel was about her faith and wondered what she would have said.  Jenica came to realize that just as Rachel was able to say “Yes!” and die for Christ, she can say “Yes!” and live for Him.  As Jenica has said “Yes!” to God and His plan for her life, she has been deeply amazed how He has led, guided, and worked in her life.

During the year of 2006-2007, Jenica had the opportunity to spend a year with NET (National Evangelization Teams) Ministries, traveling across the country putting on retreats for middle school and high school students.  Her team leader encouraged her to be open to religious life.  She told her she was open, but felt God was calling her to marriage and family life.  Deep down she knew she did not need to worry about her vocation.  She believed God, in His timing, would allow everything to fall into place as she continued to say “Yes” to Him and remain faithful to Him.

During the summer of 2008, Jenica experienced a deep healing and an outpouring and release of God’s love in her life.  She had a sense this was going to be a great year.  One day, she was sitting in Mass, at the Cathedral of Saint Paul, in Saint Paul, MN, and prayed that God would help her enter into Mass in a way she had never experienced before.  God answered her prayer.  It was during Mass, at one point, she looked up and felt so profoundly God’s presence before her.  She felt He was calling her to be His bride, to love Him with an undivided heart, and to lead others to experience His love.  From that moment on, her desire was for religious life.

As Jenica took time to discern where God was calling her, she felt called to a religious community that was Franciscan, charismatic, contemplative, and missionary.  While visiting the Disciples of the Lord Jesus Christ, in Prayer Town, TX, she experienced so much peace and felt she was home.  She felt this was where God was calling her to respond to His grace and calling.

Before entering religious life, Jenica spent nine months at the Emmanuel School of Mission in Rome where she continued to go deeper in her faith and had opportunities for mission in Italy, Scotland, Ireland, and France.  From there she entered the Disciples of the Lord Jesus Christ on August 25, 2010.  She received the name Sister Mary Gianna, after Our Lady of Grace and Saint Gianna Beretta Molla, as a novice and made her first profession of vows on August 10, 2013.  Sister Mary Gianna continues to be amazed at God’s great love and mercy, and how He continues to work.