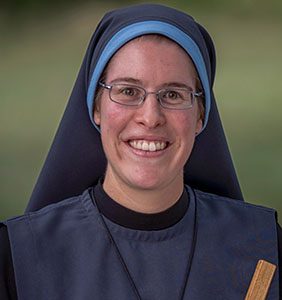 During my junior of High School I encountered God’s love for me in a powerful way. After that I decided to follow Him and I became very involved in my youth group. This opened the way for me to go on a retreat called “Going Deeper”. It was on this retreat that I began to desire to live for the Lord completely and to be His. I wasn’t exactly sure what that meant. On the last day of the retreat, after Mass was over, the Friar who was celebrant invited anyone who was discerning a vocation to the priesthood or religious life to come forward. Deep in my heart I felt this tug, but I had no clue what religious life was because I never met a Sister in my life. So I ignored the tug, however, the tug never ignored me.

Senior year continued, I graduated and chose to go to St. Francis University in Loretto, PA. The Lord took my hand and led me again to attend the Freshman retreat. It was here that I met some Sisters who were present to us during the retreat, shared their testimonies, and a little about religious life. Also, one of the staff members of our campus ministry was a Sister, so I was able to ask questions and observe what religious life is. I had no excuse now, I couldn’t ignore the tugging of my heart.

During the course of my freshman year, I was introduced to the Charismatic renewal through our prayer group on campus. Once again, I experienced the tremendous love of God in my life, in a new way which opened my heart even more to the call. I kept asking the Lord to increase the desire of my heart if He was really calling me to be a religious, and if not to decrease the desire. Throughout the remainder of my first semester that desire continued to increase and so I began to seek out different communities.

It was May of 2007, that I made my first visit to Prayer Town. The first evening walking around the grounds my heart just was on fire, and I felt like I was at home. I never experienced such peace before, I had a strange feeling this was the community God was calling me to. However, I needed to finish college. It was very agonizing to have to wait another three years, but in those three years the Lord really lead me to deepen my relationship with Him and to prepare me for entering.

August 25, 2010 fresh out of college, I followed the Lord and entered the Disciples of the Lord Jesus Christ. God fulfills every desire of our hearts, we just have to be patient and follow the Lamb wherever He goes.

“Pray, hope, and don’t worry. Worry is useless. God is merciful and will hear your prayer.” ~St. Pio will until He reveals Himself.”