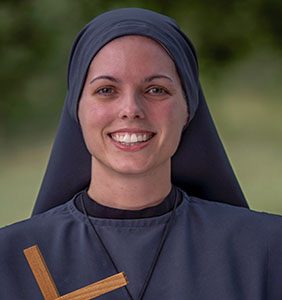 Sr. Raphaelle Marie Condon, DLJC hails from beautiful Kennebunk, Maine. She was born on March
9, 1985 and is the eldest of four children. Sr. Raphaelle Marie was raised Roman Catholic, but admits, “I
didn’t really know anything about my faith. For example, if you had asked me when I was in high school,
why we stand, sit, and kneel at Mass, I couldn’t have told you the answer. I didn’t understand the
significance of what we believe and what we do as Catholics. Also, I really didn’t know God. I prayed when I
needed something, but I definitely didn’t have a personal relationship with Him.”
At the beginning of her college experience at the University of Maine, this led to a falling away from
God and the faith of her childhood. “I thought that I knew what was best for my life and could make all of
my own decisions about how I wanted to live…I was wrong. I ended up making a mess of things,” she says.
“I stopped going to church and that began what was to become a huge downward spiral in my life. Having
the freedom to do whatever I wanted didn’t make me happy. In fact, nothing that the world promises
would make me happy actually gave me any happiness.” After experiencing a feeling of hopelessness over
the meaning and purpose of her life, she finally turned to God. “I prayed, “God, if You exist, and if You care
about me at all, help me. Just put me where You want me.””
Deciding she needed to make a positive change in her life, she transferred to St. Francis University
in western Pennsylvania. It was there that she had a radical “reversion” back to the Church. She met the
Franciscan T.O.R. Friars who run St. Francis University and the Sister Servants of the Most Sacred Heart of
Jesus who were a presence on campus. Sister says of meeting them, “I saw something in them – a joy, a
peace, a love, a purpose – that I didn’t have in my life…and I wanted it. I said to myself, ‘These men and
women know that God exists and that God loves them, and they don’t question it. It’s a reality for them! I
want to know God like they know God,’ and it was as if faith – like a sleeping lion – awoke inside of me! It
was then that I began to throw myself into everything that Campus Ministry had to offer.”
Sister describes how the Lord touched her life by saying, “And, each new event that I went to, was
like a new encounter with each Divine Person of the Holy Trinity! I encountered the Father’s love when I
went back to the Sacrament of Reconciliation after ten years of being away; I encountered Jesus in the
Word at Bible Study and in the Eucharist at Daily Mass and Weekly Eucharistic Adoration; and I
encountered the Holy Spirit and His transforming power when I went to our weekly prayer meetings and
experienced the Baptism in the Holy Spirit (for more information on that, see Fr. Reniero Cantalamessa’s
book Come Creator Spirit). Later, I even encountered Our Lady, and realized that I had a Mother in heaven
who loved me, as I learned to pray the rosary and consecrated my life to Jesus through Mary in the nine-
day consecration of St. Maximilian Kolbe! Mind you, I was twenty years old at this point and had never read
the Bible, or gone to daily Mass, or a prayer group, or prayed the rosary, and I didn’t even know what
Eucharistic Adoration was! So, it’s never too late to develop a personal relationship with the Lord and never
too late to come back to Him after spending time away from Him. He will always take you back. And
knowing God and having that personal relationship with Him, gives you a peace, a joy, a love, and a purpose
in life that the world can never give.”
After opening her heart to the Lord and to authentically living her Catholic faith, she began to
discover her call to religious life. “I knew that, whatever I was going to do with my life, I wanted to do what
He wanted and that I couldn’t live my life without the Lord anymore. I had planned to be a professor of
history, but I knew that whatever God had planned, would be better than any of my plans,” she says. “So, I
prayed that He would make His will known to me, and with the help of my spiritual director, I discerned
that God was calling me to be a religious and a Franciscan. Truly, the lives of Sts. Francis and Clare are just
so inspiring to me because they gave up everything for love of Jesus. And, that is what I wanted to do, I
wanted to give my whole life to Him who gave His life for me,” she says.
After paying down her student loans after college, and with the help of the Mater Ecclesiae Fund
for Vocations, Sr. Raphaelle Marie was able to enter our Order in 2013. “I just give all the glory and honor to
God for His faithfulness and all that He has done in my life. He is so good,” she says. Sister made her First

Profession of the vows of chastity, poverty, and obedience on August 20, 2016. And, God-willing, looks
forward to making her Final Profession of Vows in 2020. Of making vows, she says, “There is no greater
honor in this world. God chose me to be His own. It is humbling and it is a great gift. I am espoused to
Christ, Himself! Every day in vows is a joy because I live with the knowledge that I am totally His. Even in
moments of suffering, God gives the grace and there is a deep, abiding joy. I am so happy to be a vowed
religious now!” In her spare time, Sr. Raphaelle Marie enjoys reading, taking long walks, praying, singing
praise and worship music, learning and speaking foreign languages, spending time with our pets, learning
new things, and traveling. 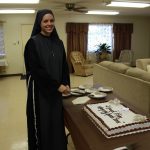 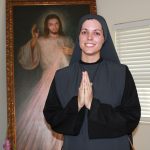 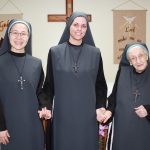 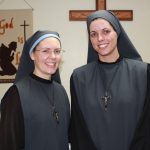 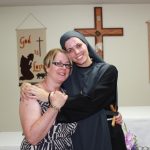 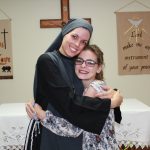 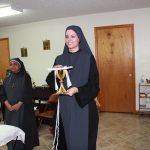 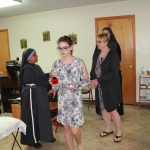 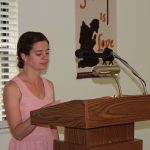 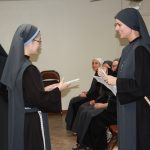 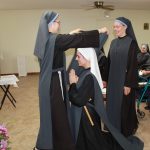 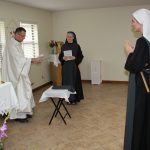 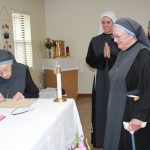 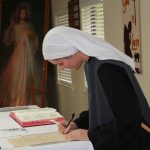 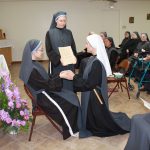 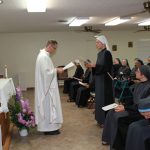 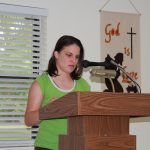 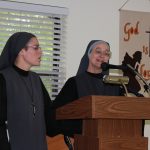 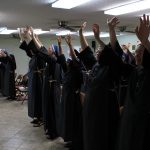 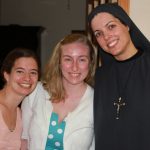