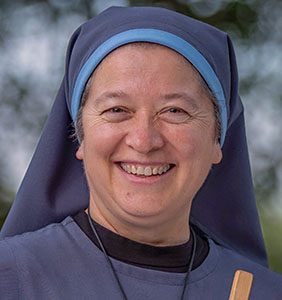 Despite the good example of her parents who took the whole family to Mass each Sunday, Norma’s faith came alive after she was baptized in the Holy Spirit. It made all the difference in the world!Norma Casas Nava was only two weeks old when she was baptized and confirmed! Her parents put a high priority on attending Sunday Mass together as a family. This caused her love for God to grow during those early years.

As a teen, Norma’s perspective of religious life was that it didnât do much good for humanity. She was twenty years old, and a student at a Catholic university when she received prayer for the baptism in the Holy Spirit that radically changed this perception. She began to grow in a deep and personal love for God. Her friends wondered about this experience. They could not understand the change that had taken place in her. Even though they distanced themselves from her for a time, eventually all of them received the baptism in the Holy Spirit, and formed a strong and vibrant youth group.

Two years later, while in prayer, Norma sensed the Lord saying to her, ”How would you like to follow me in the religious life?” Her initial response was hesitation. She talked about this with a priest, who advised her to let the call mature before making it known to others.

For the next year Norma struggled as she bargained with the Lord about this call that she felt. She found it difficult to pray. A certain restlessness in her spirit bothered her. Looking back on this time she realizes that she was running away from the Lord. Feeling that she was risking her own future happiness if she continued to hesitate, Norma decided to visit a cloistered convent that had perpetual adoration. She asked the Lord if He really wanted her to be a religious. In prayer, she was led to Sir. 2, ”If you aspire to serve the Lord, prepare yourself for trials.” With this she concluded with confidence that the Lord still wanted her to live the religious life.

She began to prepare by looking into religious communities, breaking up with her boyfriend, and asking the Lord for guidance. In 1992, Norma attended a large Charismatic youth conference in Queretaro, Mexico where she met some of our Sisters evangelizing, preaching, and leading worship. She wanted to join them right away, but the Sisters began by writing to her over the next few months. Norma entered our community in early 1993. She received the name Sister Magdalena when she became a novice. She is a gifted artist and uses that God-given talent for His glory.