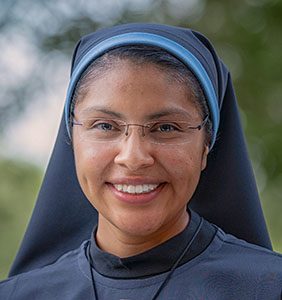 She comes from the central part of Mexico, a beautiful place close to the sleeping volcanoes in Toluca, Mexico. After being part of a youth prayer group and having participated in several National Youth Charismatic Conferences she saw those Sisters that had a cross hanging on their belt, she picked up some literature but did not have the courage to talk to them. The thought was haunting her, she could be called to be a Disciple. The next Conference was coming, she made up her mind she needed to find the Sisters and share with them her desires. During the Conference she looked at all the vocational stands and was so disappointed the Sisters were not there. At the final mass she gave God and ultimatum: “if you really want me to become a Disciple this is your last chance.” The bus with all from her prayer group was about really to leave, she got out to get a snack and as she was crossing the street – there before her eyes – two Sisters Disciples were crossing the street, too!

After the excitement of seeing the Sisters, she shared her desire to know more about them. The Sisters gave her the contact information and she left. That was the beginning of God’s response and her heart jumped to know that He was leading her on the way that will bring most joy to her heart.

She is currently in temporary vows and is serving in our house in Mexico.